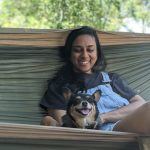 Rhea Ramakrishnan is a poet and educator from Baltimore. Her work has been published in Ploughshares, Hayden’s Ferry Review, HAD, and other journals. She teaches writing at the University of New Mexico and to youth in after school and summer programs in Maryland. 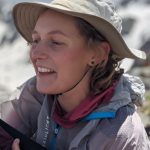 Mikaela is a third-year MFA student at the University of New Mexico. She’s walked over 8,000 miles in her life, including thru-hikes of the Pacific Crest Trail, the Continental Divide Trail, and the Appalachian Trail. Her work is forthcoming in Outside magazine. 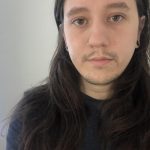 Tyler Mortensen-Hayes is a writer from Salt Lake City. His poems, stories, and essays focus on the environment and our inextricable relationship to it. He has had work published in Frogpond, Weber: The Contemporary West, Rattle, and several online journals whose domain names are currently for sale. A second-year MFA student in poetry at UNM, he is also the current Associate Editor of Blue Mesa Review. 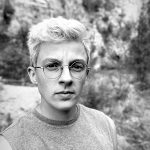 Cyrus Stuvland is a nonfiction writer and bicycle mechanic from northern Idaho. They are a second year MFA candidate in Nonfiction and have a MA in English from Georgetown. They're looking forward to joining the BMR team as Nonfiction editor. 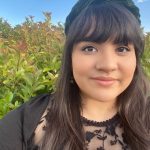 Evelyn Olmos is a poet born in Ciudad Juárez, MX, living in Albuquerque. She is a second-year MFA candidate in poetry at UNM. She is the recipient of a 2020 Poetry Fellowship from Chatter ABQ. Her work appears in The Athena Review, Sad Girls Club Lit, and Sidereal Magazine. 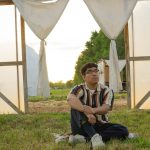 Ruben is a fiction writer hailing from the capital of the universe, Chicago. He hopes to spend his time at UNM working on a collection of short stories. In addition to being admitted to UNM, he is very proud receiving a plaque for fastest submission at local jiu-jitsu tournament in Washington State. When he is not daydreaming of the good ole days of sweating in dojos and community college basketball gyms, he is thinking about what the role of writing is during the collapse of empire.  More importantly, he is spending time with his partner Danielle and her family, desperately trying to get them to become miserable Chicago Bears fans like him.

Lisa D. Chavez has published two books of poetry, Destruction Bay and In An Angry Season, and had poems anthologized in Floricanto Si!: U.S. Latina Poets, Camino del Sol:  Fifteen Years of Latina and Latino Writing, and elsewhere.  Her essays have appeared in Arts and Letters, The Fourth Genre and other magazines, and in anthologies including The Other Latin@: Writing Against a Singular Identity, and An Angle of Vision:  Women Writers on their Poor and Working Class Roots.  She is currently the director of the creative writing program at UNM.