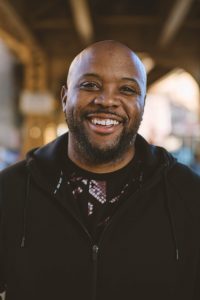 Idris Goodwin, author of Can I Kick It?

Idris Goodwin taught for several years at my undergraduate alma mater before shifting to theater full-time. I was always disappointed I never got to have him as a professor (he started after I graduated), but luckily Idris has been out here doing the work. There’s no shortage of ways to learn from him. He has a Pushcart-nominated collection These are the Breaks. He co-wrote Inauguration with Nico Wilkinson; the book won a 2017 Literary Arts Award from the Pikes Peak Arts Council. He’s been on Sesame Street and HBO’s Def Jams. He has written and produced more plays than I can list here. He wrote a monologue for the Hands Up: 7 Playwrights, 7 Testaments collection that responded to police brutality and particularly the murders of Michael Brown and John Crawford. He most recently adapted the Young Adult novel Ghost by Jason Reynolds for the stage.

His newest project is the poetry collection Can I Kick It? (after the A Tribe Called Quest song of the same name). This book is part homage to rap and sampling in hip hop, part celebration of Black art and life, part indictment of the difficulties of living in a Black body in America. It’s a book you don’t want to miss.

You call yourself a “break beat poet”. What does that mean?

So Break Beat Poetry emerged during one of my many conversations with fellow poet Kevin Coval, who like me came up on 80s and 90s hip hop. For us hip hop was our gateway to a deeper engagement with the poetic. But make no mistake, we were interested in a poetic that felt like the rap ciphers we participated in.

Since hip hop music, whose foundation is the break beat, was the spark and fire for us, Slam Poet didn’t quite apply, nor did Hip Hop poet or any other labels. We wanted to define ourselves.

I put out an album in 2010 called Break Beat Poems, I wrote an essay in my 2011 book called Break Beat Poetry, How We Got On, the first in my series of Break Beat Plays premiered in 2012 and a few years ago the first Break Beat Poets Anthology was released on Haymarket Books. There have been two more since and there are two more on the way. And more and more  poets of color such as Jose Olivarez, and Camonghne Felix are seeing their books published under that imprint.

How does writing from a history of hip-hop make you think about the line in poetry differently than most poets would?

I appreciate the direct intimacy of the reader and the writer but first and foremost I write for sound and rhythm and audience. What can I say that will engage and hold the ear for the duration?

And I want the line on the page to reflect the way in which I’d recite it.

How did you decide whose work/which snippets of pop culture to sample? Did the idea of the book as a whole grow out of the idea of sampling?

One day I realized that every time I crafted some pithy remark on social media I was basically giving away content. Perhaps there is more to say that 140 characters cannot contain? And every single time, that pithy remark would transform conceptually into something more specific, personal and complicated.

I’ve never been comfortable with the idea that somehow pop culture is separate, or only lives in the silo of entertainment. It’s about us, whether they get it right or they don’t. What does the popularity of superhero films say about us? What do all of these icons and symbols say about us? And what was the pop that raised me? What does it say about me?

Pop is the accumulated consciousness. But also artistically, by drawing from the creative landscapes of these icons and touchstones, allows me to pull from everything that was on their aesthetic palette.

That’s what sampling is about—I’m in conversation with another artist but also the people that influenced them, that they “sampled” from in their own way.

I’ve been to a lot of bad events that try to take on how poetry and hip-hop are similar or do similar things. People really struggle to talk about this, but I think your book does a beautiful job of making similarities clear, particularly in the poem “Break Down” After Kurtis Blow.  Here you use the common “after” style to indicate that you are riffing on Blow’s style. If the reader knows hip-hop or does a little research, they will realize that you’re riffing on his song “The Breaks”. You’re essentially sampling his song in a blazing indictment of white people wearing blackface. It’s a really masterful way to create an emblematic piece that shows how poetry and hip-hop are related. How did this poem come about?

I often say “Sometimes the poem writes itself”. Once I read that quote from Mark Herring I was like, “Come on, there’s only one way this piece can go!” Kurtis Blow himself was a poet, so it was a no brainer. You got blackface and old school rap?! Poetry Gods sent me a gift! 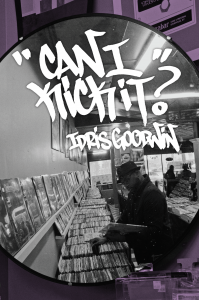 Several of the poems at the end of the collection are beautiful and difficult poems about being Black in America. This is a thread that is present throughout the book, but I think it was really important you ended on this painful reality, especially in a book about Black art. Too often American society wants what Black people create but not to hear about the struggle of racism. Did you set out to end with the poem “Breaking Sweat”?

I think that’s spot on, Brenna! Black Art has been not only the production of objects–its been the mode of survival. The songs served as veiled maps of escape. The poetry as protest and rallying cry. It was illegal for black folks to read and write so the first published book by Phyliss Wheatly in the late 1700s was illegal! There were spaces black musicians could and couldn’t play and for a long time the places they could play, only white folks could attend. Fast forward now, we’re having conversations about inclusion in creative spaces, writing rooms, publishing houses, theatres, etc.

There is still a chasm to fill. I believe I was chosen by my ancestors to tell the stories best I can, with as much precision, heart and hope as possible. So that is what I do even when it’s painful. Even when there is a voice in my head saying, “you’re just going to bum everyone out with this.”

In addition to the poetry books you’ve published, you’re also an acclaimed playwright. How does your work in theater impact your poetry or vice versa?

There is no theatre without poetry. Poetry is the root of all creative, non literal expressions. The actors are poets, scenic, lighting and costume designers are poets, dancers are poets, DJs are poets.

Certainly all the amazing actors I work with have shown me a thing or two about how to make something feel new every time. I used to find doing the same poems more than 12 times laborious. But now I am happy to do poems like Say My Name or These Are The Breaks until folks are tired of hearing them.  Theatre has shown me ways to keep things exciting and interesting for myself.

You’ve said you are “committed to using the arts to cultivate more diverse and equitable spaces for all.” How do you see art being used to create equity outside of artistic spaces in the larger world?

I work in the realm of live performance primarily. You can galvanize groups of people from different walks into the same space, then show them something that awakens their sense of humanity, curiosity, empathy and passion. We need that badly. We have never been so connected and yet ironically, we’re very isolated, splintered and terrified. We have to play a part in healing and reconnecting us.

The Break Beat Poetry/Play movement is about bringing communities together through storytelling. Very very dynamic poetic culturally specific and honest storytelling. But we position the story at the center, not the storyteller if that makes sense. The listener is in the cipher with us. It’s about the collected perspectives coalesced in the middle of the cipher, and if we listen close enough and let the stories do their work—that’s how we evolve.