By the Staff Readers of Blue Mesa Review 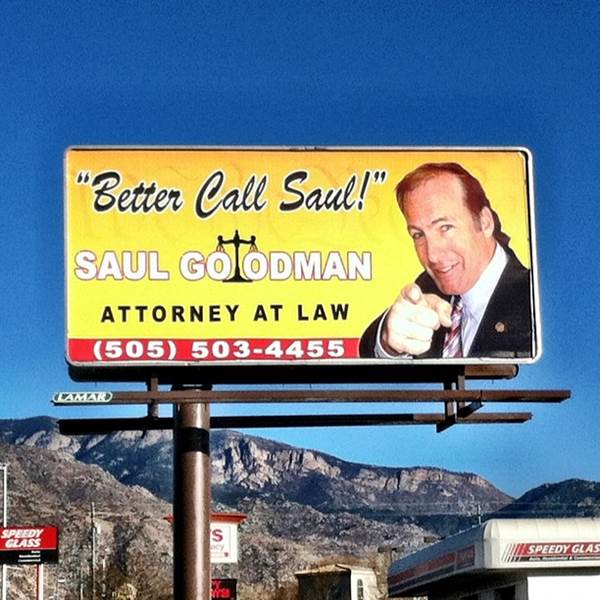 Albuquerque’s Better Call Saul elevated an ambulance-chaser to an American icon. He represents not the nation of law and justice that we believe in, but the one of flag-wrapped scams and endearing scammers that we’re stuck with. The series’ hero, Jimmy McGill, introduced in Breaking Bad, pretends to be Jewish to attract customers, and after a few low-level cons hits pay-dirt when he brands his rackets as patriotism, complete with the inflatable Statue of Liberty atop his strip-mall office.

Anyone who has crossed Albuquerque’s sprawl knows that Saul Goodman didn’t just spring from the imagination of some Hollywood scriptwriter. His forefathers—or perhaps his imitators—populate about every billboard in town. The result is a dour gallery of stern men who insist that we’ve been wronged and, if we just had the guts to dial their number, we too could claim our share of the national bounty.

For the benefit of both fans and haters, the staff readers of Blue Mesa Review present a juried gallery of real-life Sauls, ranked in order of increasing amazingness. 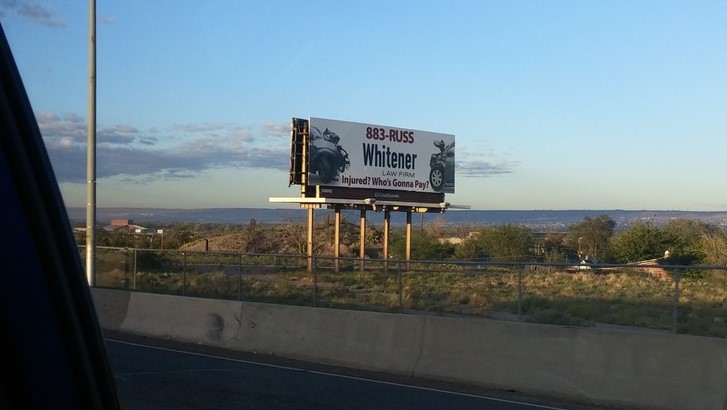 Our judges noted that like Bigfoot this attorney can apparently only be captured in grainy long-range photos. Judges recoiled from the attempt at slangy diction (Who’s Gonna Pay?) which smacked of trying to be hip and sounding like Ghostbusters. More controversially, judges discovered that Whitener died several years ago, causing one to wonder if he represents you via Ouija Board. His obituary states that he applied to 20 law schools and got into one, and he built a giant office “that housed a two-story palm tree, purple aquarium and tiled waterfall” because, in his own words, “I wanted to have something to leave on the planet to say, ‘Hey, I was here.’” 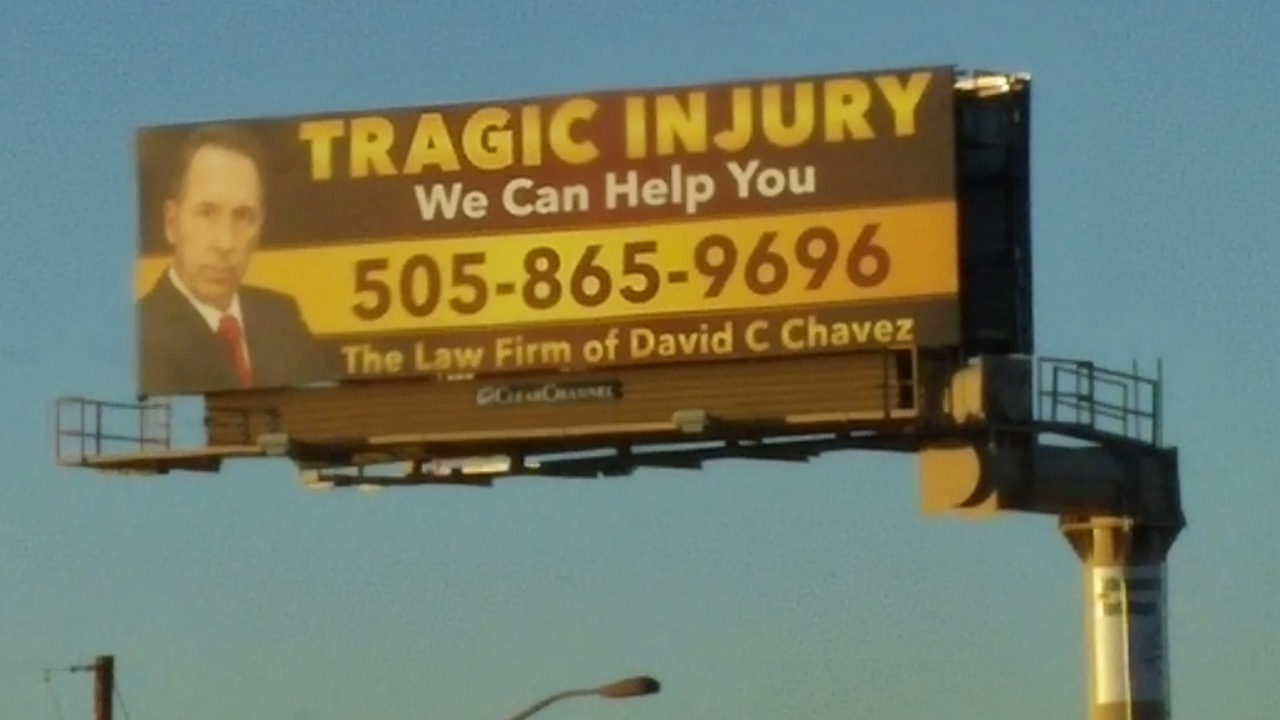 Our judges were not impressed by the magisterial gold font, the self-aggrandizing middle initial, or the ostentatious deployment of The Law Firm of… “It’s like he didn’t think people would believe he was a real lawyer.” The inclusion of the 505 area code feels slightly desperate, like he’s not actually from here. Our judges speculated that, “No one calls him. He calls you.” One surmised that Chavez did not intend to litigate “Tragic Injury,” but to inflict it. Another contemplated calling out of pity: “I feel bad for him.” 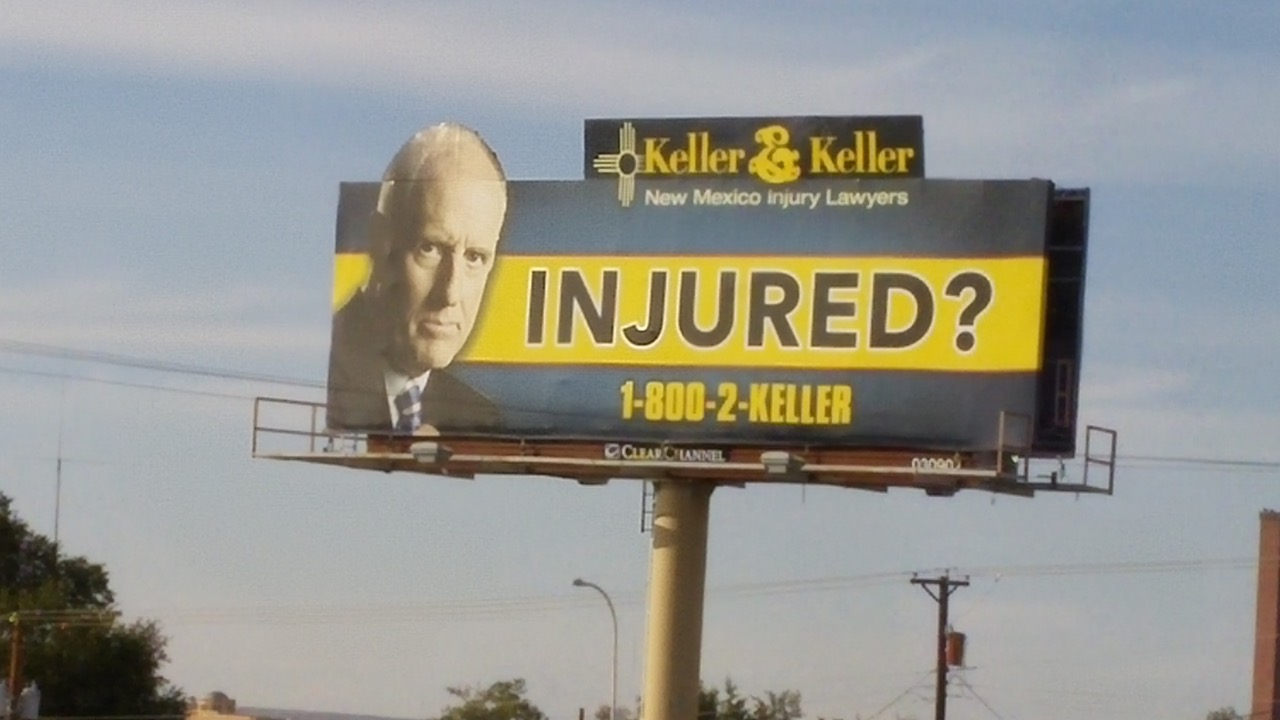 Our judges could not help but wonder if Esquire Keller’s bald pate provided an attractive roost for migratory cranes. We were duly impressed by the baroque ampersand. The question of “Where’s the other Keller?” led to a cursory search, which revealed that Billboard Guy is neither Keller nor Keller. This raised another question, whether he was a professional model. The judges scratched their heads as to how exactly a search was conducted for a bland model who resembles “unseasoned mashed potatoes.” Questions of objectification arose when one judge referred to “Mr. Keller” as “just a hot blonde.” The firm’s attempt to enamor itself to locals with the use of a Zia symbol rang hollow when we learned that it’s based in Indianapolis. 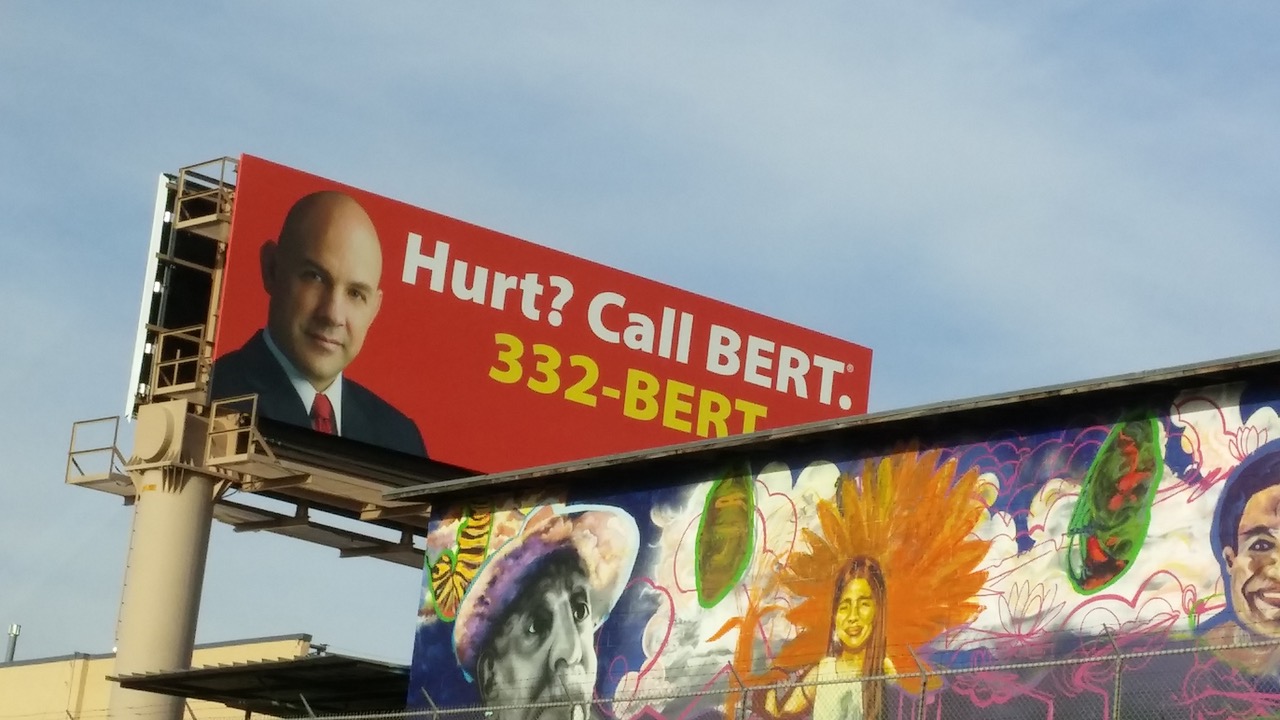 As poets, we could not resist the rhyme. It shall outlast the monuments of princes! Judges admired Bert’s “confidence,” the type of guy who–like Madonna and Cher–requires no surname. The dude even trademarked his name. Do we need legal permission to utter it? We liked the “no nonsense” face on striking red background with brawny sans-serif font, but we did wonder if he’d stolen the design from Ron Bell, who you’re about to meet. Judges respectfully suggested an offshoot: NEED AN ATTORNEY? CALL ERNIE. 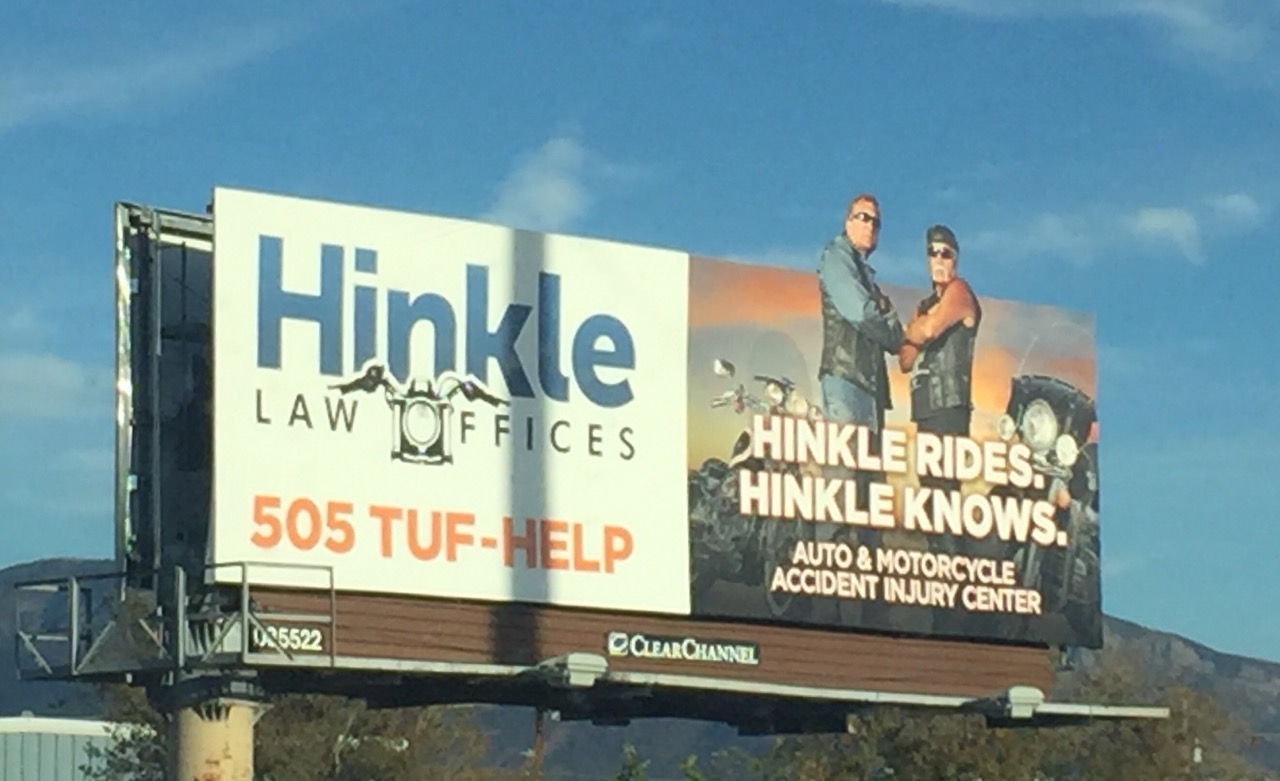 Judges debated if these guys were the real thing or just boojie dudes trying to look like bikers, and had real doubts about whether arriving in court flanked by Dog the Bounty Hunter and the dad from American Chopper was prudent legal strategy. “Do they rock the black leather at trial?” asked one. Also, “Does he use spray-on tan?” But ultimately we accepted Hinkle’s tufness, confident that he could ruf up opposing counsel, even the judge. He appeared capable of “taking you to hell and bringing you back.” Whatever it is that Hinkle knows—we want to know it, too. 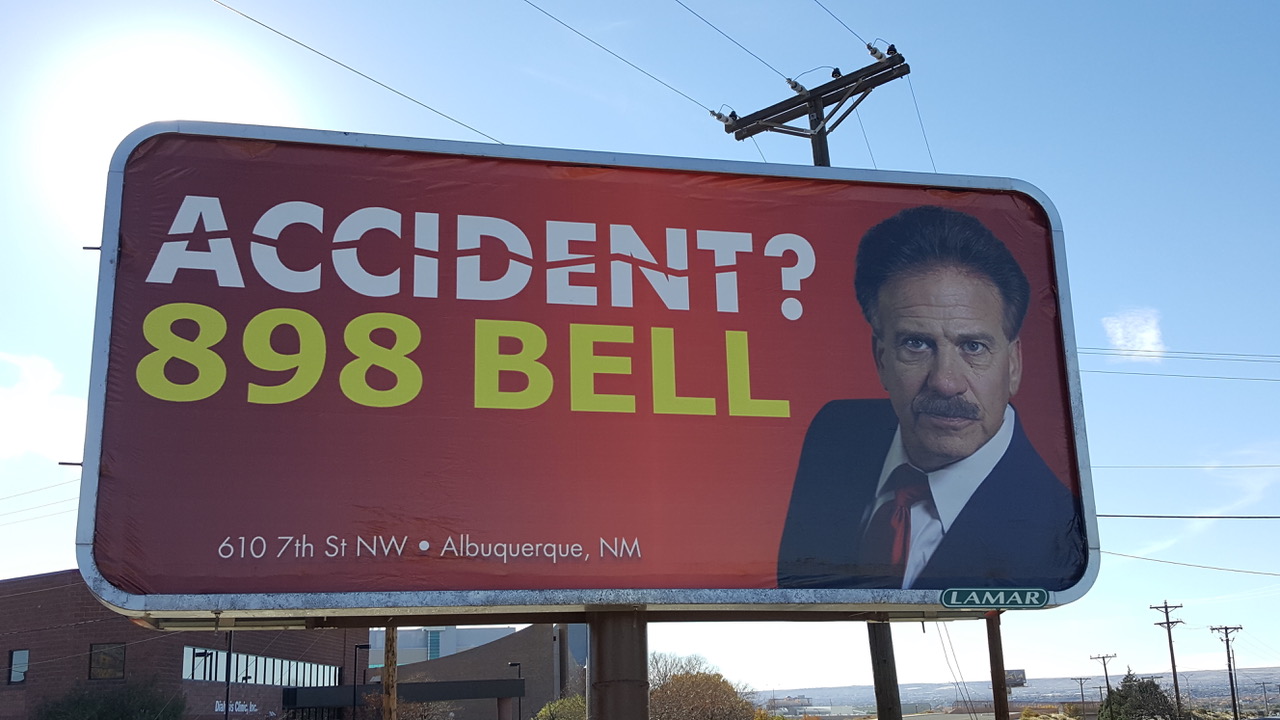 Ron Bell takes Bert’s single name and raises him a dollar. He’s so famous around here that he doesn’t even need a name, just a phone number. His billboards are so ubiquitous that one native Burqueña sighed fondly: “I’ve known about Ron Bell since I was born.” We admired his Tom Selleck mustache and full head of hair and the chiseled brevity of the one-word slogan. Not confined to a single genre, Bell has starred in teeveemercials in a motorcycle racing suit, and bare-chested in boxing regalia. He even has his own emoji. Overall, we found him trustworthy and avuncular but one judge dissented, “I would not be comfortable if he were my uncle.” A judge noted that Bell had himself been convicted of DWI, but another judge remarked, conclusively, “Yeah, but he beat the charges.” Case dismissed.

Lastly, Ron Bell is widely believed to be the real-life inspiration for Better Call Saul, a mantle that he proudly accepts. 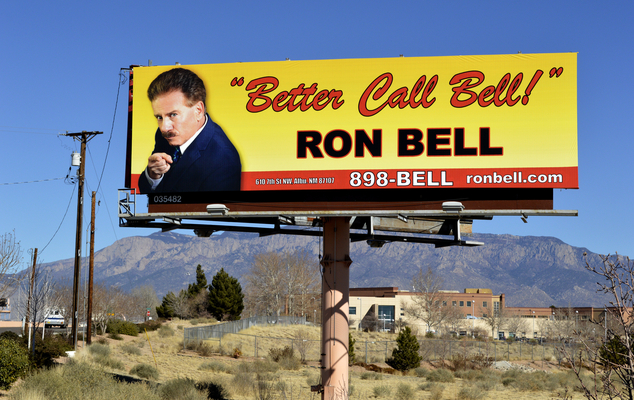