Ok, so my dad is pretty white.

When I was younger, he, my mom, my two sisters and I would pile into our cramped car for a family road trip. Coming from my hometown of Las Cruces, New Mexico, 45 miles north of Ciudad Juarez, Mexico, this meant going through a border patrol checkpoint. 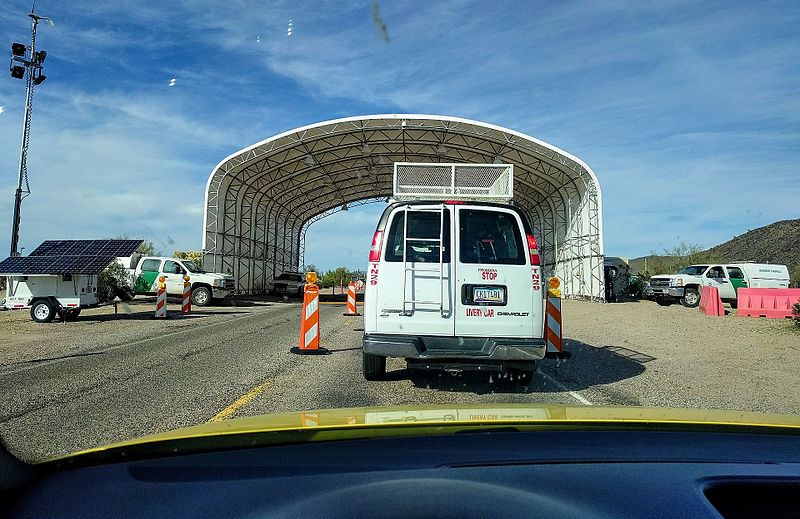 Waiting in a long line of cars while cameras on the side of the road took pictures and a dog on a leash sniffed around each car was just part of the routine. When we finally get to the front, a man with sunglasses and a very full holster would look at my dad and wave him right through, or sometimes ask one question: Are you an American citizen? My dad would reply, yes, and we would continue our drive.

During one of these trips, my mom drove so my dad could rest. Mom turned down the music and rolled down her window prepared for the usual question. But it was not the usual this time. He asked, “Where are you coming from?” “Where are you going?” “How many passengers are in your car?” “Are you carrying any illegal substances?” My mom answered them one after another and after a few moments we were back on the road. My dad said something about how weird it was, but it wasn’t mentioned again.

When I say my dad is pretty white, I mean like white white: both his parents can trace their lineage back to Europe, and he grew up in Wyoming.

My mom is Hispanic. New Mexico born and bred, both her parents having a long family history in the Southwest and Mexico.

She seemed to shake the incident off, at least in front of my sisters and me, but my dad seemed genuinely surprised.

None of this struck me until this last year with the extreme changes to immigration policies within the United States. In February of this year, my hometown made national news when over 2,000 students missed school for two days after an Immigration and Customs Enforcement raid was conducted and arrests were made on the outskirts of town, leaving students and their families too afraid to leave their own homes.

On September 5th, hundreds of students at the University of New Mexico and Albuquerque Public Schools staged a walkout in protest of the Trump administration’s decision to end the Deferred Action for Childhood Arrivals (DACA) program. This decision leaves the lives of over 7,000 New Mexico DACA recipients, and even more Dreamers who are unable to apply for DACA, hanging in the balance as the program begins to be phased out. Recently, a coworker moved back home to Arizona because she is afraid that her family will be taken away and she won’t be able to see them.

A few years back, I moved from Las Cruces to Albuquerque to attend UNM. This means every time I visit home, I have to drive through this stop. It’s not really a big deal to me, and typically all they ask is if I’m an American citizen; granted, I look a lot like my dad.

Once, I was driving my friend back to Albuquerque, and as we went through the stop, she was talking on the phone with her mom in Spanish. That time, the officer adjusted his glasses while he blatantly looked from her to me, and asked where we were coming from and what was the purpose of our trip. A subtle difference, but enough that for the next half hour the words “racist asshole” came up quite a few times.

Another time, I drove back early on a Monday morning so that I could arrive in time for work. A car ahead of me must have given the wrong answer to one of their questions, leaving me in an unmoving line of cars for 45 minutes. When finally getting to the front of the line, I saw a car pulled over to the side with officers on walkie-talkies and K-9’s on leashes surrounding it.

It felt like a ridiculous excuse when I arrived 30 minutes late to work and had to explain I got held up at the border patrol checkpoint, and then feeling like I needed to specify that I wasn’t the one who was being interrogated.

With the recent discourse and political action, it’s hard not to question the effectiveness—and fairness—of these checkpoints. I’m not trying to say these stops are or are not unconstitutional, or that all these guys do is racially profile. But, there’s a border patrol station on the actual border of Mexico and the United States, and there are at least 30 permanent checkpoints in Arizona, Texas, California, and New Mexico, and at least 40 more that are “temporary.”

It’s important to mention that drivers aren’t required to show a passport, papers, or proof of citizenship when going through these checkpoints, which seems strange and pointless when you consider how easy it would be for someone to just lie and say, “Oh yeah, I’m a citizen.”

Legally, drivers don’t have to answer any of the questions, so what’s really the point? But, I guarantee you’re not going anywhere until you tell them you’re American.