I sometimes get sucked into reading Amazon reviews. For many products, they are helpful and warranted (see: Haribo Sugar-Free Gummy Bear 5LB Bag), but I usually stay away from any type of book review on Amazon because they can be a bit ill-informed.

Somehow, though, the first review listed under Best American Essays 2015 caught my eye the other day. To sum it up, the reviewer, Tessa, doesn’t think it’s representative of the best American essays from the year. OK, Tessa, I’ll bite. Why?

“Cheryl Strayed is a compelling writer, but why, oh why, was her essay “My Uniform” included in this anthology? *spoilers ahead* This brief confessional narrates the author’s long sartorial journey with a single pair of black pants, which when they became too decrepit to wear, she finally threw away, save for the crotch, which she cut out and mailed to her husband. Is this the best we can do in a year when we are beset with ISIS, Ebola, the ongoing effects of global warming and species extinction? Seriously???”

This reviewer is just one person, but the review speaks to a culturally accepted dialogue that female sexuality has had its time, now let’s move on to more important topics. Women aren’t dying, are they? In our post-feminist world, women are empowered and sex is all sorted out, right?

As an essayist who focuses primarily on female sexuality, I call bullshit. Tessa fails to understand how Strayed’s essay fits into a relatively short history of feminism and the reconstruction of female identity.

“My Uniform” matters because Strayed is developing a new narrative for female sexuality. As females in 2016, we’re allowed to enjoy sex, we’re encouraged to request or demand orgasms, the sexiest thing we can do is “take control”, any Cosmopolitan magazine would make that very clear. And yet we are not in control of the narratives surrounding our bodies. We do things we think make us look or feel good, like shaving our legs, wearing tight dresses that accentuate curves, or perching ourselves onto high heels. But who decided what looked or felt good before we came along? Certainly not us women, not yet. We have grown up with a narrative that says our bodies are meant to be experienced in a way that gives pleasure, we are meant to be looked at. I’m not saying it’s wrong for a woman to shave her legs or wear a dress, I’m simply stating that our own ideas of “sexy” are not and have not been our own. Strayed’s essay matters because she is making it our own. 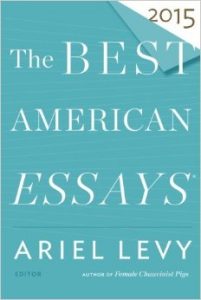 Her essay describes the black lingerie Strayed wore for her future husband at 27, her uniform as the girl who seduces, the girl who plays into his desires (though she can’t discern why she should wear something small and lacy just to take it off again), then reveals herself in their marriage as the woman who wears an old pair of black sport pants. She writes:

“I’d bought [the lingerie] for the sole purpose of finding and fostering intimacy but in fact I wore it on the night when we were the least intimate, when I was projecting a slightly fraudulent image of myself to him instead of the actual me. Which, for better or worse, is a woman who wears pants a nun would find appealing.”

When the pants finally reach their end, Strayed reluctantly tosses them, but not before cutting out a small rectangle of the crotch and sending it to her husband in the mail. She gives us a new way to think about intimacy in the form of a tiny piece of fabric saturated in a familiar scent known to only two people on this earth.

This is arguably one of the most important essays in the anthology, and Ariel Levy, the editor and author of Female Chauvinist Pigs, certainly knew it, too. We are the makers of our moment, of our ideas about our sexuality, and what we make today will serve as grounding for the next generation of women to crawl out of the dizzying patriarchal centrifuge that is female sexuality.

Hayley Peterson is an MFA student in creative nonfiction at the University of New Mexico. She is currently working on a book of personal essays about female sexuality. Sorry, Mom and Dad.