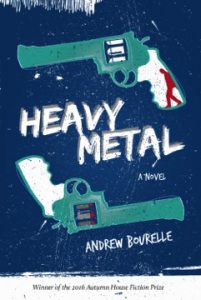 Andrew Bourelle’s debut novel, Heavy Metal is fast and furious. A page-turner, winner of the 2016 Autumn House Fiction Prize, the prose clips like a teenager in a tee-shirt and jean jacket on a bitterly frozen school day, trudging across a wintry corn field with AC/DC in the ear and a .44 Magnum in the pocket. Simple and exact, the themes of suicide, gun-violence, bullying, brotherly-love, teenage-existential-angst, class and work put the reader on that empty orange school bus gunning toward decision-time. 3 O’clock High meets Rumblefish with a touch of A Separate Peace, this intelligent and suspenseful bildungsroman, is as cinematic as literature can get without becoming a predictable script. A sucker-punch from 1980s hard-luck America, Heavy Metal, is the perfect book to approach delicate issues in the classroom or for that moment when you want to block out the world and disappear into a well-told story. Plot-driven, littered with cassettes and Chevy Novas and Taco Bell, Bourelle has struck narrative gold.

BMR: Tell us about how Heavy Metal came to be?

Bourelle: I wrote the first draft in 2011-2012, right before coming to New Mexico. Then, I honestly tinkered with the manuscript for four years, looking for publishers but continuing to make revisions. It was kind of an experiment to see if I could write a novel. I was teaching a lot of classes. I just said, I’m going to forego writing short stories for a while, and write like a page a day, 4-5 days a week and just go.

BMR: Are you a structure guy? Did you plan much? Map it out?

Bourelle: I didn’t. I had an idea where it would end up. I knew it would take place over a week and a weekend. No outline.

BMR: Were there themes you wanted to approach? Say gun-violence or bullying?

Bourelle: I don’t do this very often, but I think I had the title first. Just this idea of the figurative and literal weight of the gun. And I wanted to explore motifs. Keep metal as this continual motif. Muscle cars, a roll of quarters, things like that…

BMR: And the music…

Bourelle: Yes, but really the gun is the weight.

BMR: Right, it begins and ends with the gun.

BMR: Were you aware you were writing a page-turner? I mean I dare someone to put this book down halfway through…

Bourelle: I did want to write something that people would want to know what would happen next. But it’s more of a character study really. When people say that, it’s a page-turner, I feel good. I mean a week in the life of a teenager doesn’t seem full of plot twists and suspense, but I appreciate the compliment.

BMR: Stylistically, did you have any rules in mind, you know short sentences or whatever…

Bourelle: Maybe it’s just my style, but first person present tense was deliberate. Having it try to seem like teenage-narration was the goal. I played with rhythm a lot.

Bourelle: Not really. It started as a story. The first chapter is kinda a version of a story that was published previously, in Jaberwock Review, long before I was think of a novel. Then when I decided to write a novel, I looked back at my stories and asked if there were any that could keep going and this one, well… I could tell more about that character.

BMR: Was the original story a chapter? Or did you just go in and enlarge?

Bourelle: More or less chapter one. And I decided I’ll have Danny, the main character, get out of bed the next morning and see where it goes from there.

BMR: You never mention Ohio, where you’re from…

Bourelle: That’s intentional. I wanted to keep it general, rural and flat. I picture it as mid-west. I mean Ohio has bleak winters, but my adult life has been out West. I’ve gotten used to warmer winters, but as a kid, I didn’t know. I thought this is how winter was, so the descriptions, no hat, just a thin jean jacket, that’s how it was. But now when I go back to visit, I’m like man, bundle up.

BMR: The story is set late 80s. How much did you research or was it all memory?

Bourelle: Mostly memory. I had the time period. But when I put in musical references, I did fact check to make sure. Specifically, I don’t give a date, but I didn’t want people thinking, “That’s impossible, that song didn’t come out till ’91.”

BMR: Kathy Ireland in Sports illustrated? And the car, the Fiore? Toyota Cressida? And the music, wow, blast from the past…

Bourelle: Yeah, you’re my age, you get it. But I was thinking, okay, this is my first novel and I didn’t want to take on something like feudal Japan or a 19th century mining town. I needed to do something where the setting and time period was easy for me.

BMR: Do you think about your audience when you write?
Bourelle: I didn’t. I finished it and then thought, “Who is gonna read it?” It was mostly an attempt to finish. I thought, even if it’s not published, I got one out of the way. The next one will be easier. You hear writers say, my first novel was terrible; my second was the one I published. I didn’t put a lot of pressure on myself about marketing or publishing. In retrospect, maybe I should have.

BMR: I mean some might market it as YA?

Bourelle: Some early readers said that, and I did a little research. It could be but this feels a little different. In terms of audience, I did think I wanted younger folks to like it. I didn’t want to limit the story to someone who grew up in the 80s. I wanted it to be accessible and to cross generations.

BMR: Would you consider it a coming-of-age novel?

BMR: I really liked this part… about the gun… the machinations of…

Bourelle: Don’t give anything away!

BMR: … okay. The part about grappling with destiny…

Bourelle: I mean Danny does struggle with it all being inevitable. He doesn’t believe in God, but fate, you know… existential thoughts…

BMR: It makes him very teenage. A real 3D character. But I won’t give anything else away. How was the publishing process?

Bourelle: Well, my wife and brother are my first readers. They aren’t creative writers but they are great readers. I submitted and queried agents. More friends read it over the years, which was all really helpful. The earlier drafts were never quite right. And Autumn House helped a lot. Starting with large edits all the way down to proof-reading. Christine Stroud was a great help.

BMR: Did you submit to a lot of contests?

Bourelle: No, just a few. I’ve been submitting collections for years, often a finalist, but have never broke through and I had this book just sitting there. What’s it going to hurt to submit and it happened right away! I always felt like agents didn’t read it. One even said a coming-of-age-story about a male doesn’t sell. I thought, if I could just get someone to read it, they’d publish it. I’m thrilled with Autumn House.

BMR: Since winning, are agents knocking on the door?

BMR: How do you set up your writing day?

Bourelle: I try to write everyday but I have two young children so that doesn’t happen as much now. So I write in spurts, carve out a whole day. Shoot for 9 hours or something. What you find is you have to make the time, the universe doesn’t give you free time, noone hands you two free hours in the morning.

BMR: What are you working on now?

BMR: You already have, I don’t think you’ll have to try too hard…

Bourelle: Ha, thanks. But more a mystery/thriller, set in Nevada. I don’t write autobiographically, but I tend to set them in places I have live.

BMR: How do you choose what project to work on next?

Bourelle: I try and set goals for myself. One year I said I was going to write two short stories a month. 24 in a year, and I did it. Goals and challenges. In the case of Heavy Metal, it was x number of words per week ‘til I finished. When I don’t have a goal, I find myself floundering.

BMR: Do you feel happier in the middle of a project or between?

Bourelle: I’m happiest when I am writing.

Heavy Metal will be released on Feb 1st. (purchase here)